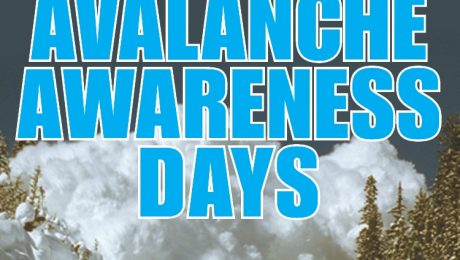 Here in Fernie, we have a weekend full of interactive and educational activities in the base area and on the mountain!

There will be several activities going on during the day, including:

Apres:  Fundraising Auction in the Griz Bar  (the auction will take place during the band’s set break approx 4:00 pm – 4:30 pm)

Huge thanks go out to our sponsors:  Helly Hansen, Avalanche Canada, and our auction gear partners-  Marmot, Arcteryx, and MEC.

Fernie Alpine Resort promotes safety in the backcountry with Avalanche Awareness Days. For one week, you can learn more about the dangers of avalanches, watch virtual demonstrations from our ski patrol, and practice your beacon and probing skills in the on-mountain transceiver training area. Don’t miss out as there are amazing prizes to win from our sponsors, Helly Hansen and Avalanche Canada!

Do you know everything about avalanches and the backcountry? Test your skills and knowledge with our Avy Savvy Challenge! Locations to our signs are below. Please answer each question on the sign and enter your response into our online platform. Each question answered enters you into one of our draw prizes sponsored by Helly Hansen & Avalanche Canada. Merino wool base layers, gloves, and so much more to win!! Plus, everyone that enters will receive a free one-month FATMAP Explore membership thanks to our friends at FATMAP.

Location 1. Weather Plot (IMPORTANT: DO NOT ENTER THIS FENCED OFF AREA – sign is posted on a bamboo stick outside)

Paul and Drift will be in the Avalanche Dog Training Area from 11am – 1pm on Saturday 22nd. Feel free to stop by and say hi to this dynamic duo. They will also be there to answer any questions you might have about what they do to help keep everyone safe at FAR.

Location: Straight off of Timber Chair – Straight onto Fallingstar – Area is right above Freeski Training area.

HOW TO PLAY & WIN PRIZES:

Here is our plan for how we are going to run the buried treasure game safely and effectively within the current COVID-19 guidelines. 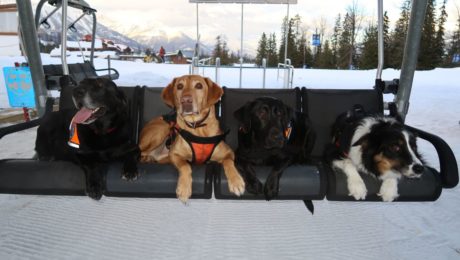 The Avalanche Rescue Dog program is an integral part of the snow safety and avalanche program of the Fernie Professional Ski Patrol. Dogs have been used in avalanche rescue situations since the early 1900’s and because of their heightened sense of smell, tracking abilities and agility they are some of the greatest rescue assistants.

Meet our avalanche rescue dogs who live and train with the lucky members of our ski patrol team:

One of our veteran avalanche rescue dogs, Neko is a 6.5 year old Labrador Retriever who has taken part in several rescue missions.  Working closely with his human assistant Steve, they have over 35 years of combined search & rescue and ski patrol experience. Neko is Steve’s second certified avalanche rescue dog.

Neko is an extremely friendly and personable dog and is our go to dog for on hill demonstrations.  Here he is 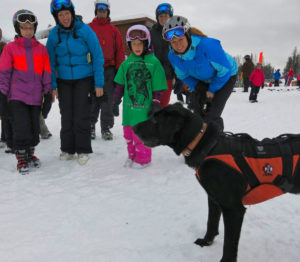 teaching us about his job during our Avalanche Awareness Days, held annually each January.  Neko and Steve can often be found at the top of the lifts doing drills and other exercises to keep their skills sharp.

Tarn is a Border Collie and like many avalanche dogs, Tarn started training to be able to find people in an avalanche situation at just 8 weeks old.  He was officially validated as an Avalanche Rescue Dog in 2011 at the course held right here in Fernie. 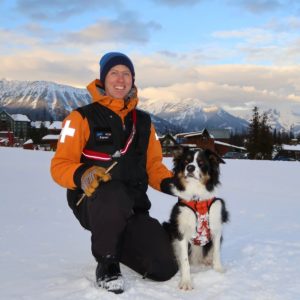 Now at 8 years old, Tarn and his human assistant Forest are daily companions. They ride the lift together in the morning, (occasionally mixing it up with a snowmobile instead) and ski down to the base at the end of the day.  On a usual day at work for Tarn, there’s time for a little bit of play at the patrol shack at the top of the mountain although he’s always ready for a rescue mission if need be.  Forest has been a ski patroller at Fernie Alpine Resort since 1998, and is on our avalanche forecasting team. He is a Professional member of the CAA, as well as being an avid backcountry ski tourer. Watch this Youtube video to learn more about the ski patrol program at Fernie and to see Tarn working and playing around on the mountain.

Digger is a yellow Labrador Retriever from Eromit Kennels in Quesnel, BC.  His birthday is January 25, 2011 making him 6 years old this winter.  He validated (got certified) with his handler Kirk Gutzman at the annual CARDA (Canadian Avalanche Rescue Dog Association) course at Kicking Horse Resort in January 2013. 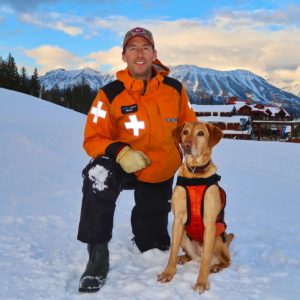 Digger is Kirk’s second avalanche dog (his previous avalanche dog was Lily) and he has been on the Fernie patrol since 2000.  Digger loves his days out on the snow with Kirk and is fuelled and graciously sponsored by Horizon dog foods. Check out this video of Digger and Mogul working on the mountain.

Pika is a 7 year old Belgian Malinois, and Jennifer’s second certified avalanche dog.  Pika is always ready to work, and is happiest when giving 110% (or more)!  You might see this team working fun obedience drills near the patrol huts, or doing practice searches around the mountain.  Check out this video to see Pika in action. Jennifer has been with the Fernie ski patrol since 2001, though now has more of a part time presence.  She works full time for Avalanche Canada in the South Rockies Field Team, and is the Instructor Coordinator for the Canadian Avalanche Rescue Dog Association.

Mogul is a 2 year old German shepherd who was validated at the course in Whistler January 2016!  His human assistant, Megan Kelly, has been a ski patroller for nine years at Fernie and is one of our snow safety educators, talking to schools about our snow safety programs.  When not training, Mogul loves playing with his favourite toy- a ball on a rope. You can often see him and Megan at the top of the mountain practicing his obedience and having lots of fun. Here’s a video of Megan and Mogul training last winter near the Lizard Bowl top hut.

Tabor is a black Labrador Retriever and the newest member of the avalanche rescue dog team. Tabor was born in Quesnel, BC but it wasn’t long before his handler Sean and his wife Emma came and picked him up.   He was a little unsure at first to leave his brothers and sisters but soon learned that his new home in Fernie is a pretty great spot too. Tabor fun fact – he and Neko are half brothers! 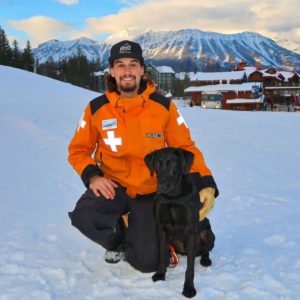 Tabor will be turning 2 this winter so he still has LOTS of energy and LOVES to play. Sean and Tabor always have lots of fun on the mountain and you can see them around playing and doing training exercises. His handler Sean is his favourite person and if you see him on the mountain playing with Sean, please keep your sharp ski and snowboard edges away. Tabor and Sean were validated this January 2017 here at their home resort in Fernie!

Check out this video for more information about our avalanche program at Fernie Alpine Resort and be sure to come check out Avalanche Awareness Day (January 28, 2017) for demonstrations of avalanche dog skills, the avalauncher shooting t-shirts, avalanche transceiver beacon training and more!