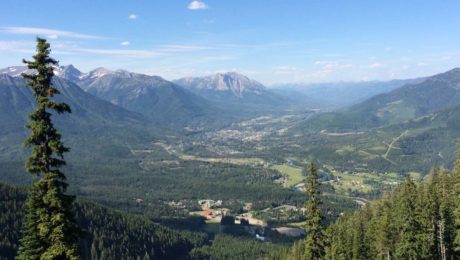 There are places that call themselves 5 star campsites. Have you ever been to a campsite that gives you 5 marvelous experiences with you starring in them? Fernie Alpine Resort mountain top camping did that for a group of 3 of us. We had arrived at the base of Fernie Alpine Resort. Cory, Cennia and myself. We were met by the resort staff that was going to aid us during our stay. Nels, Dini and Kelly. It was 3:30 on a Saturday afternoon. The weather hot and dry. The resort base was filled with people. Some milling about, others heading off to do summer activities that the resort had to offer. Like biking, hiking and sightseeing. We were about to do a night of camping on top of the world. Dini had checked us in and issued us our lift tickets. Nels chatted us up with the lay of the land and what to expect. Kelly and others helped unpack our gear from the car and load it into the suburban. Our camping gear was to take the mountain road up. We were to take the Timber Express chairlift up.

THE LIFT RIDE UP 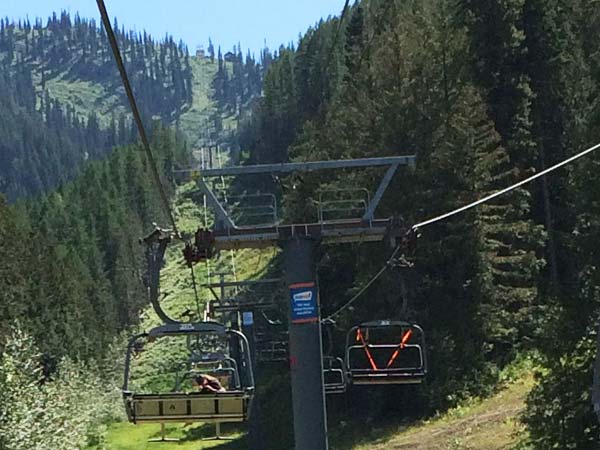 Nels and Dini walked us to the Timber Express chairlift. Cennia requested to go up the chairlift first by herself. She wanted to take pictures with her new Cannon camera. Cory and I were to follow. As the chairlift scooped us up, Cory said “Here we go”. At that moment, the chairlift swept us upwards, grabbing our bodies with a mild force. I saw a rush of excitement in Cory’s eyes. Seconds later he was exclaiming, “I have never been on a chairlift before!” “Has this got your adrenalin up?” I asked him as the swing of the chair ended. “Oh Yeah”, he replied in an affirmative voice. We settled into the ride up while admiring the breathtaking 360 degree view. The chairlift climbed higher and higher. Up and over the light green vegetation we rode. Over the tall dark evergreen trees we sailed. We spoke enthusiastically at the changing terrain and distance below our feet. “This is awesome”, Cory stated. After eleven minutes of riding up we arrived at the mountain top campground area.

THE LOST BOYS CAFÉ & OUR CAMPSITE 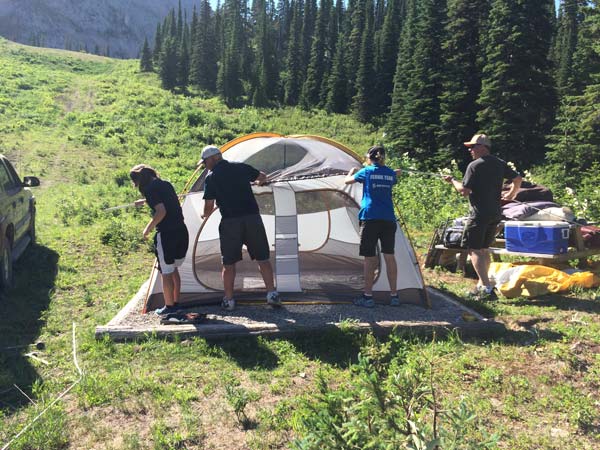 Disembarking from the chairlift, we headed over to the Lost Boys Café. A mountain-top café with an outside deck. It was the central location of the mountain top campground with secluded camping spots near it. As we entered the Lost Boys Café, Dini offered us cold refreshments. We each took one and walked out on to the deck. An impressive spectacular view of looking down into the Elk Valley was before us. The miniature town of Fernie below with lines in the valley floor that were roads. This was an amazing vantage point. Nels, took us to the deck railing and told us about the valley and a little bit of its history. He pointed across to the tops of other mountain peaks giving us their names. Cennia was taking pictures with her new camera. It was all so peaceful and serene. Next we sat in large chairs taking in all the majestic scenery, chatting and enjoying the hot summer day. The deck had a metal fireplace with no fire. There was a ban on open fires due to a hot and dry summer in the region. That was OK. The place was fully licensed and the staff attended to all our needs. It was time to head over to our campsite and set it up, a two minute walk away. There we unpacked our gear and everyone pitched in to set up our tent. I remember Dini getting the tent rods ready and Kelly orchestrating the rise of the tent. Nels handing out the tent pegs. Tap, tap, tap went the hammer on the tent pegs. Everybody pitched in and within 15 minutes our campsite was set up. It was in a clearing on a small plateau nestled in by two giant mountain rock pinnacles called Mammoth Peak and Elephant Head. Mammoth Peak still with a small patch of snow in a shaded area. A picnic table was next to the tent plot. Green vegetation spread out from the plot to the base of the rock pinnacles and surrounding tree lines. It was a fantastic camping spot. This was where we were going to spend the night under a full thunder moon.

After enjoying the campsite for a while, we headed back to the Lost Boys Café for refreshments. There we relaxed and again enjoyed ourselves on the deck of Lost Boys Café. We were going to explore. Visit the Lost Boys Lookout and travel over ancient sea beds uncovering fossils of ancient times. Not before long we were on our way. Parts of some trails were lined with a strings of rocks on each side. Other parts had lush leaves, flowers and bushes along the path. We hiked though sections with trees aligning the path. Hiking up some and hiking down some. Nels and Dini would take turns narrating as we went along. Dini would point to some of the floral and tells us their names, explaining which one bloomed early and which would bloomed late. Nels with history lessons about the mountain and why the rocks were upside down in this area called the lizard range. All our questions being answered as we hiked along. We learned that the bottom branches on the trees that started high up from the ground was because that was how high the snow fell in winter. The Lost Boys Lookout was breathtaking with yet another stunning view of the valley. I even collected an ancient fossil along the way. All in all is was a sensational hike. 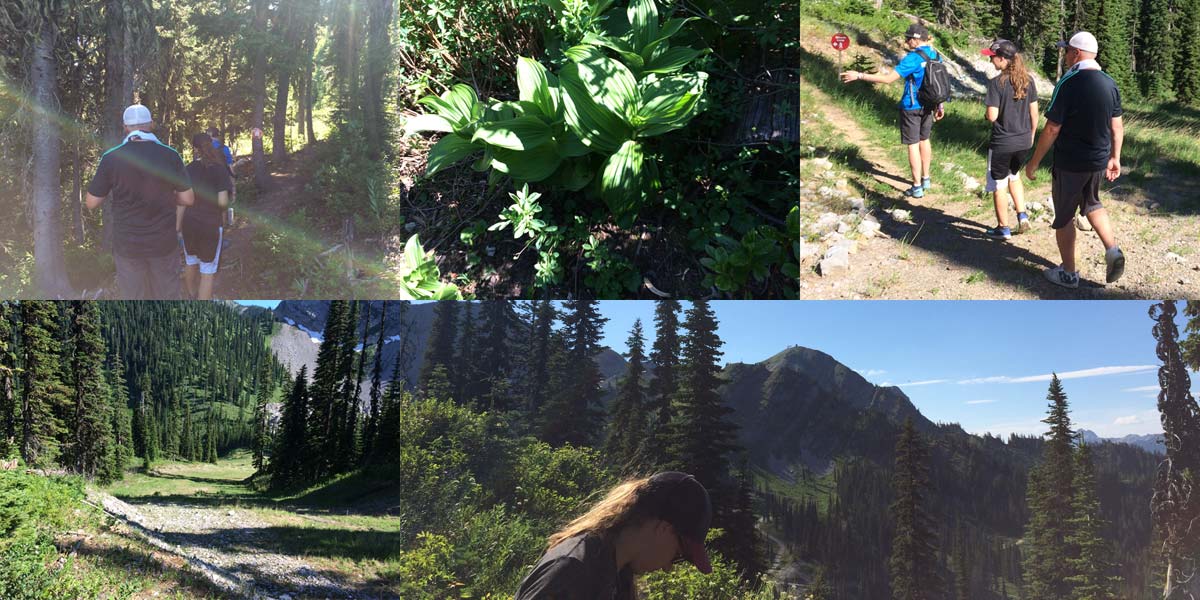 We returned to the Lost Boys Café to relax, drink and mingle. Entering the café, I now saw a table set with white plates, wine glasses and silverware. It was a setting for 6. A barbecued dinner was being prepared for us. Kelly, Dini, and Nels were to join Cennia, Cory and myself for a delicious dinner. I realized we all were enjoying each other’s company and this was going to be a fabulous way to have a camping trip meal. Cory said, “This is great, we didn’t have to pack any food”. Dini and Kelly brought in the food from the deck and then we all sat down. The meal was barbecued steak. Skewers with vegetables roasted over the barbecue. Potatoes baked in the barbecue and a fresh green tossed salad. We dug in, dressing our plates with all the goodies that was set before us. Chatter was going around the table. Drinks being poured with the light clanking sounds of dinner ware. We were festive, enjoying a grand camping feast on a mountain top. The view as we ate was remarkable. The sun was about to set and I reminded Cennia that she wanted to get a picture of the Sun setting from the mountain top. She slipped away for a minute and did just that. After the meal we relaxed back on the deck. Telling each other stories about events in our lives. What a great day so far we all had. About an hour later we headed back to the campsite.

When I returned to the campsite it was dark, however there was just enough light to make out where you walked without a flash light. No open fire was allowed. The three of us sat at the picnic table, reflecting on the day’s events together. It was about 11:30 pm when the most spectacular thing happened. The moon started to crest over the pinnacle of Mammoth Peak. As it moved up I could see tiny black outlines of trees in its cresting circle. I gaped at it, feeling how lucky I was to witness on a mountain top, this thunder moon. As I stared at it I could see it slowly rising. Its glowing circle becoming full as it ascended up and over the mountain peak. Higher and higher it climbed into the night sky. What an awesome way to end night.

I woke up early and wanted to catch the sun rise from the Lost Boys Café deck. I got there just in time to take a picture. A tranquil peaceful morning was taking shape. Soon Dini and the others arrived. A tasty breakfast was served and by 10:00 am we had all our gear packed up and headed down the mountain via the chairlift. Like the mild grabbing force of the chairlift the mountain top adventure had grabbed me. Like the amazing vantage point at the Lost Boy’s Café, I was amazed with what I saw and experienced. Like the history lesson, I learned of new friendships with the staff. Like the festive meal, the camping was joyful and hearty. Like the full moon, the camping trip had thunder! 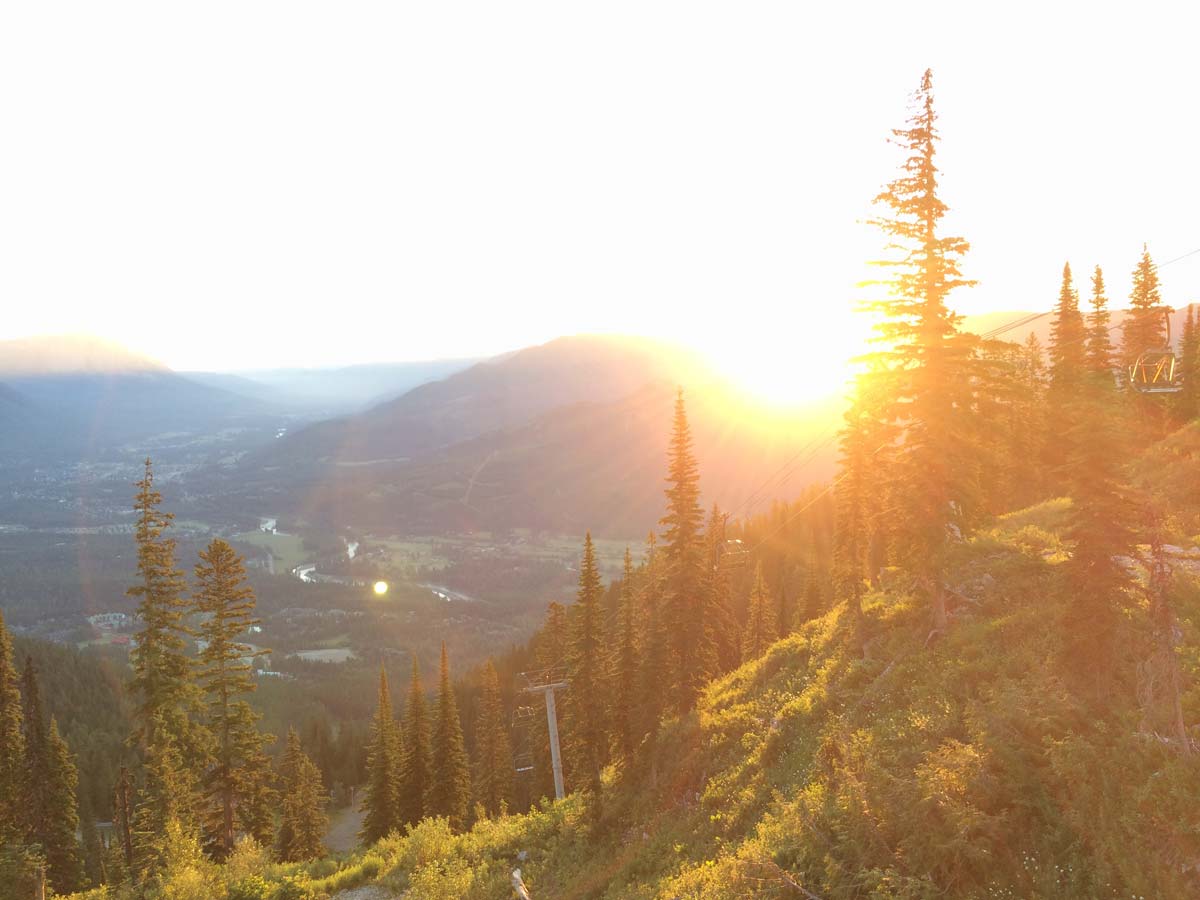