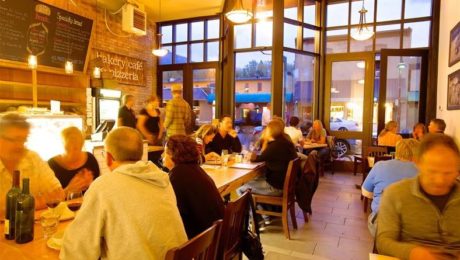 If you’re spending time in Fernie this Winter Season, you should be planning ahead for at least one memorable night out on Downtown Fernie’s vibrant 2nd Avenue. The ingredients for the Perfect Aprés Ski Party? How about: delicious food, fantastic ambience, great friends and fun. 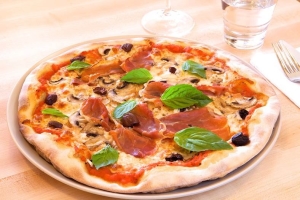 Fernie favourite, the Loaf, can deliver all the goods!  Loaf has an excellent local reputation for casual fine-dining with great service. Their range of Italian-inspired menu items and freshly prepared dinner specials are available nightly alongside their award-winning, stone-baked, Italian-style pizzas.  Loaf is a great choice for families and groups – they can accommodate large parties, private functions and even arrange live music and entertainment to make your party a memorable one.  Just call the Loaf on (250) 423-7702 to discuss your requirements.

FernieFoodFoodie FernieFun StuffVacationsWinter
Read more
No Comments
Why is everyone in Fernie smiling right now?
Wednesday, 28 October 2015 by Cali Sammel 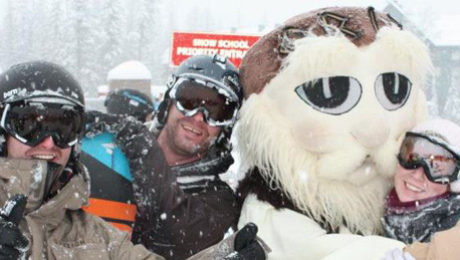 Snow, that’s why!  We’re off to a snowy start here at Fernie Alpine Resort, with the snow in fact first falling at the beginning of September right as we were closing down our summer operations!  While it made a brief disappearance so far in October, it returned this week and is a great sign for the upcoming ski season.

It started with a brief dusting overnight the weekend 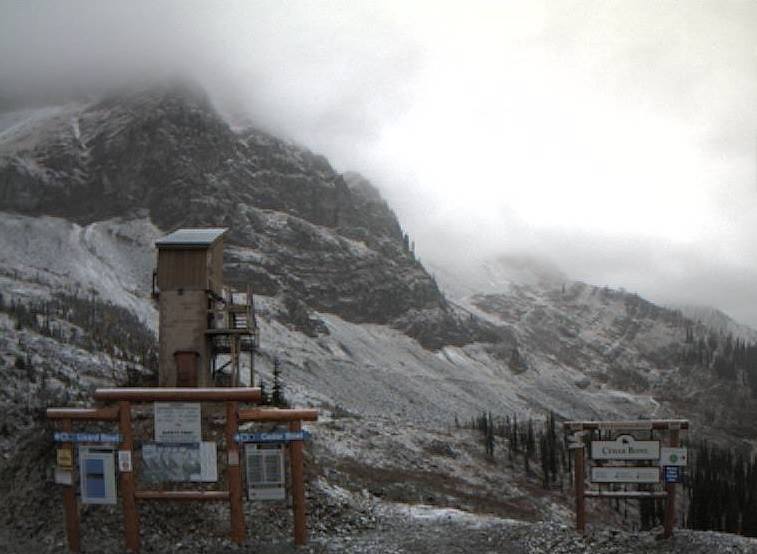 Photo from the Top of Bear Chair – October 26th (morning)

And continued into Tuesday! 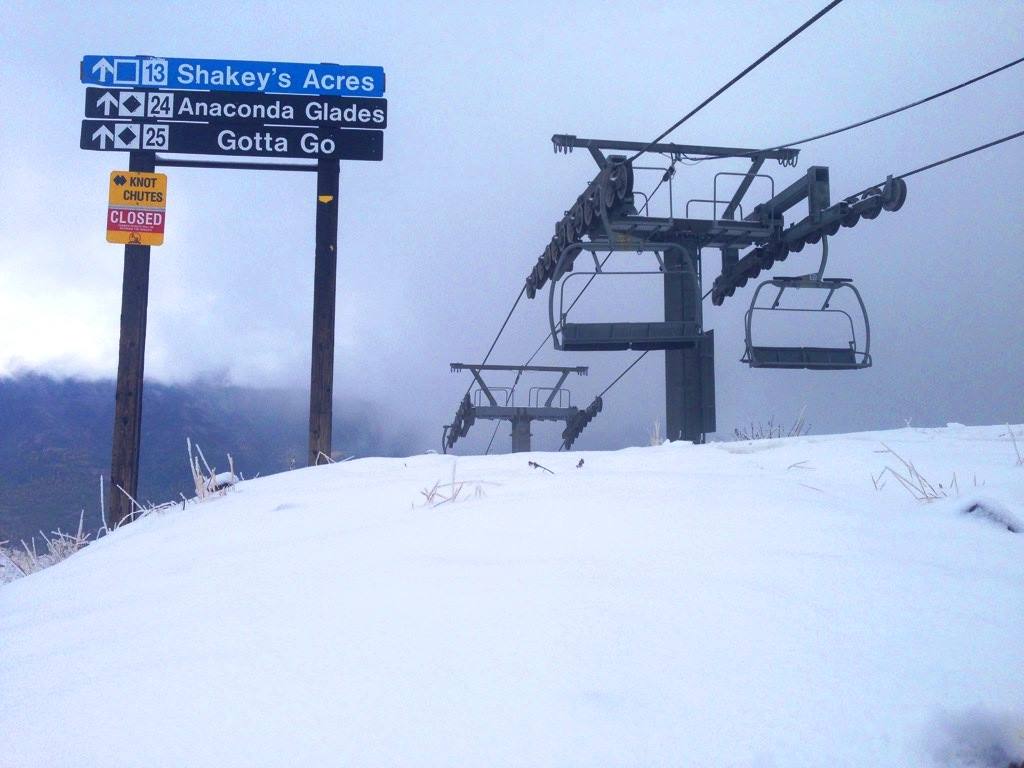 So get ready to get in line for first chair!  Opening date is tentatively scheduled for December 4th, stay tuned to our online events calendar for updates closer to the date. 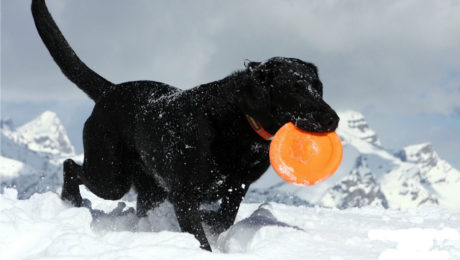 Dogs have been man’s best friend since they were domesticated some 40,000 years ago.  Since then their role in society has been shaped by their loyalty and ability to work closely with their human owners.  Dogs have been used in avalanche rescue situations since at least the early 1900’s.  With their heightened sense of smell, tracking abilities and agility outdoing all human efforts they are some of the greatest rescue assistants.
Meet our avalanche rescue dogs who live and train with lucky members of our ski patrol team.  They are a vital asset when there is an emergency situation on the mountain and have helped out on more than a few occasions. 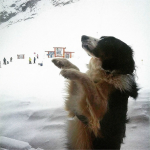 Tarn – showing off some of his more graceful skills. 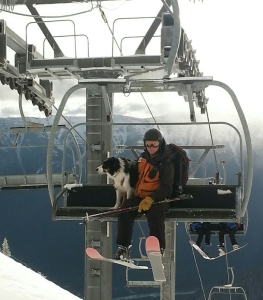 Steve & Tarn riding the lift to their patrol shack


Like many avalanche dogs, Tarn started training to be able to find people in an avalanche situation at just 8 weeks old.  Now 6 years old (turning 7 in January 2016) him and his human assistant Forest are daily companions.  They ride the lift together in the morning, (occasionally mixing it up with a snowmobile instead) and ski down to the base at the end of the day.  On a usual day at work for Tarn, there’s time for a little bit of play at the patrol shack at the top of the mountain although he’s always ready for a rescue mission if need be.  Watch our Youtube video to learn more about the ski patrol program at Fernie and to see Tarn working and playing around on the mountain.

Another one of our veteran avalanche rescue dogs, Neko – now 5 years old, has taken part in several rescues.  Working closely with his human assistant Steve, they have over 35 years of combined search & rescue and ski patrol experience.

Neko is an extremely friendly and personable dog, here he is (below) teaching us about his job during our Avalanche Awareness Days, held annually each January (and getting in a photo bomb while he’s at it).  This season’s event is scheduled for January 16th, 2016, check out our online events calendar for more information closer to the event date. 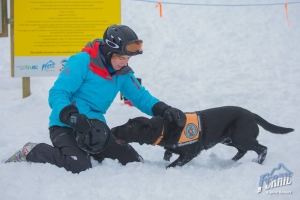 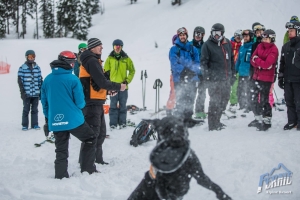 And now introducing some of our junior program members, training to take their certification courses soon;

Mogul  & Tabor
Mogul is a one and a half year old German shepherd (left) he’s in training to become an avalanche rescue dog and has his exam this January on Whistler.  His human assistant, Megan Kelly, has been a ski patroller for nine years at Fernie.  When not training, Mogul loves playing with his favourite toy a ball on a rope. You can see him and Megan from Wednesday’s to Friday’s 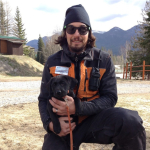 at the top of the mountain practicing his obedience and having lots of fun!  Tabor and his human assistant Sean (right) are training for his exam, coming up soon.  This will be Tabor’s first winter season at Fernie Alpine Resort – welcome to the team Tabor!  Tabor fun fact – him and Neko are half brothers!

Find out more about our Avalanche dog & ski patrol program at on our Ski Patrol page.

Did you know?
Cats also assist our team at Fernie, watch this super serious and definitely informative video here. 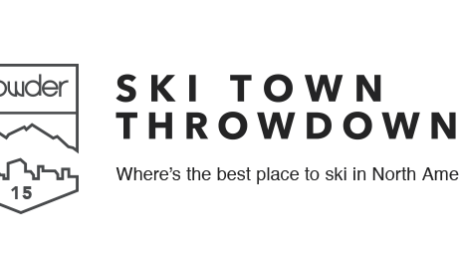 We’re up in the first round in the 4th annual Ski Town Throwdown by Powder Mag! VOTE for Fernie now, voting for the first round only runs until this Thursday Oct 15th at 7pm MST! 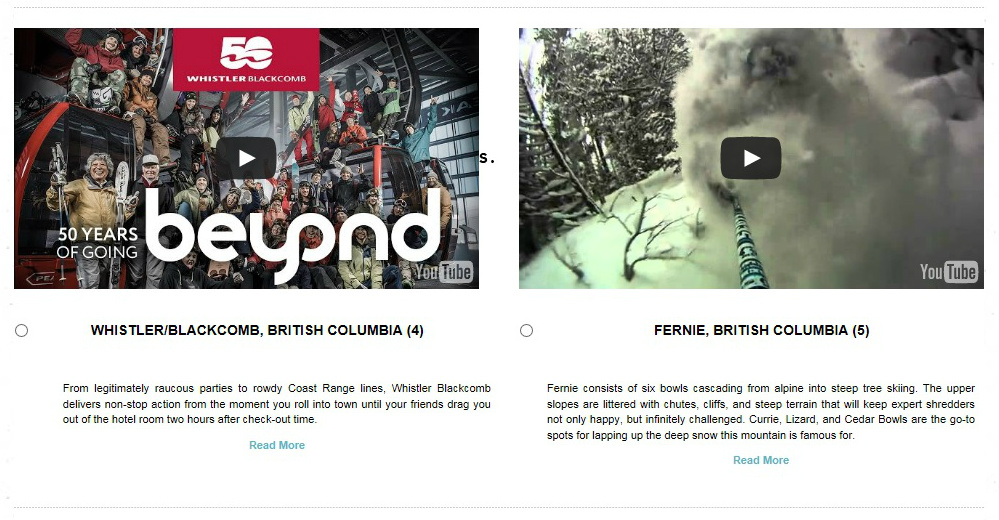 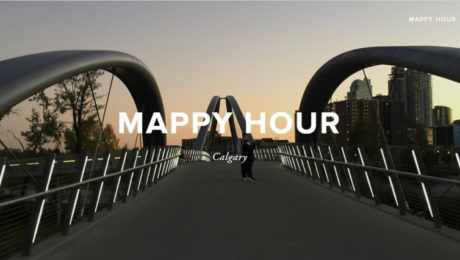 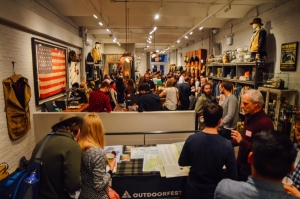 A Mappy Hour event in NYC

New York City-based OutdoorFest is expanding their popular Mappy Hour program internationally to Calgary this October!  A Happy Hour night with a twist, it offers a chance to meet fellow skiers, backpackers, kayakers, climbers and adventure buddies and to plan adventure packed trips with a like-minded outdoor community.  Launching this new event series in New York City in 2014 and Washington, D.C in early 2015, Calgary is a perfect next event location – being close to so many outdoor activity options it draws enthusiasts from all over to settle into city/mountain life. 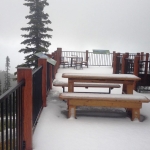 With some already having fallen in the mountains, the backcountry skiing and fitness theme for October’s Mappy Hour comes at a fitting time, there’s enough time to get in shape before our tentative opening date on December 5th!

Who should attend?
Anyone who loves to hike, kayak, ski, surf, climb, and generally explore the great outdoors!

For location and to RSVP visit the Mappy Hour website. 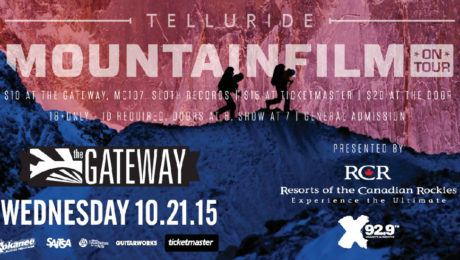 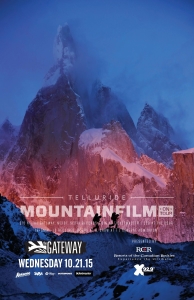 Coming to Calgary on October 21st is Mountain Film on Tour! Started in Telluride – Fernie, Kimberley, Kicking Horse, Nakiska, Kokanee and X92.9 have partnered with The Gateway at SAIT to bring Calgarians the opportunity to be inspired, educated and entertained with films exploring cultures, our environment and adventure. Doors Open at 6pm, Films start at 7pm!

“We are stoked to not only share our passion for skiing and snowboarding but hopefully to inspire adventure in others.  Just like our guests inspire us with their amazing experiences in the mountain at Fernie, Kicking Horse, Kimberley and Nakiska.” says Matt Mosteller, VP of Marketing and Resort Experience at Resorts of the Canadian Rockies.

Buy your tickets from Ticketmaster now!

Join the Facebook event to see who else is going and to see the film playlist.  Enter to win tickets from the X92.9 blog, draw is October 14th. 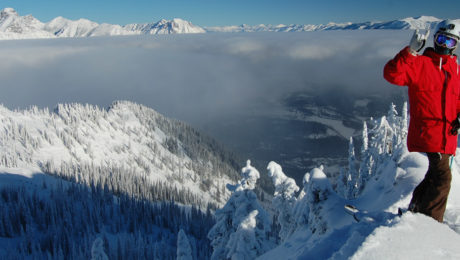 Robin Siggers discovered Fernie some three decades ago long before someone conjured up that delicious sounding term Powder Highway. The Vancouver boy never left. It’s a Thursday afternoon, and I’m following Siggers as he drops into Corner Pocket, a spicy little couloir that squeezes into 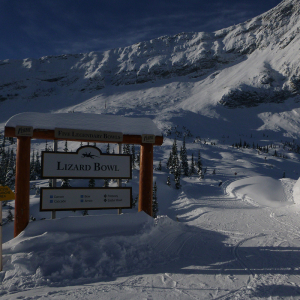 wide open Lizard Bowl, one of five bowls at Fernie Alpine Resort. The couloir features a fixed rope allowing people to hand line down the steep, often wind polished entrance that always gets the adrenaline pumping. Siggers goes first. He holds the rope, does a side slipping abseil to where the chute opens up. He releases the rope and after a trio of tight jump turns, exits the couloir then waits for me in the lee of a vertical limestone cliff that trims the bowl. This guy clearly loves skiing. As operations manager he probably bags more days on snow than an airline pilot logs time in the air. He loves skiing so much, that he’s out here today, on his day off, shredding like a 25 year old with a bunch of visiting writers.

For the already initiated, the Powder Highway needs no introduction. For the uninitiated, think of it as the place in British Columbia where you go to realize your skiing dreams, where the terms steep and deep are more than just platitudes on a brochure or website – they’re real, very real. Nature pays special attention to this corner of BC, a province already blessed from a snow sports perspective. As winter weather fronts march east from the Pacific Ocean, they discharge moisture on the rugged Coast Range. By the time these systems hit the Columbia Mountains and western slope of the Rockies, they have recharged with moisture from interior lakes. Snow falls again, this 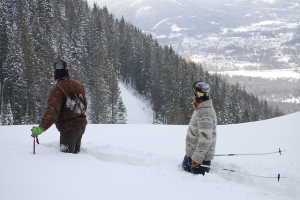 time in dreamy, fluffy, feather-light quantities. There are no guarantees; it’s weather after all, but the odds are on your side when you travel the Powder Highway. The ridiculous variety and concentration of world class destination resort, cat, backcountry lodge and heli skiing operations is a testament to the riches. Skiers are smart this way. Like Robin Siggers, they go to where the goods are. You’ve probably heard about the Powder Highway, and it’s now lodged in your brain. It won’t go away, so it’s time to act. Consider Fernie Alpine Resort and Kicking Horse Mountain Resort the southern and northern bookends to your Powder Highway road trip. Fernie overlooks the charming town of the same name, tucked into the Lizard Range, a magical piece of geology that puts the lie to the claim that it never really snows in the Canadian Rockies. Here, where the craggy Lizard Range sits perpendicular to the normal north-south axis of the Rockies, intensely local weather systems re-circulate over the mountains often dumping coastal quantities of snow on the resort’s array of wide open bowls, chutes and long meandering tree runs. By the time, you’ve zig zagged your way up Kootenay back roads and Columbia Mountain valleys, legs feeling fit and acclimatized to Powder Highway vertical, you’ll arrive on the western side of the Rocky Mountain Trench at Kicking Horse Resort. This is 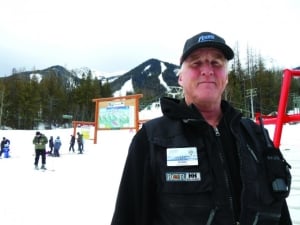 where you’ll get your game on – again. As you ride up the Golden Eagle Express gondola your eyes will scan the bony ridges that cut the Dogtooth Range, and divide the Kicking Horse into four main zones of downhill fun. Top to bottoms at Kicking Horse are legendary. Stack a few of these 1,260 meter vertical back-to-back and you’ll have no problem sitting at the Eagle’s Eye restaurant and tucking into a lunch of Elk Bourguignon or some good old Alberta beef. Or perhaps you’ll make dinner reservations at this peerless mountain-top dining room. You’ll watch the moonrise, and the first stars twinkle over the surrounding peaks. Or perhaps snowflakes falling in the amber glow of the outdoor lights. You’ll dream of the Powder Highway and when you’ll come back. Once experienced, never forgotten. Just ask Robin Siggers.